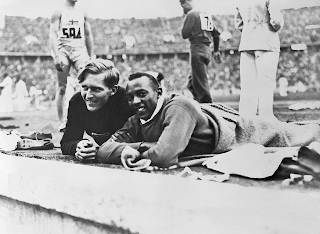 “Do nothing from selfishness or empty conceit, but with humility of mind regard one another as more important than yourselves” -Phil. 2:3

China is hosting the XXIV (24th) Olympic games right now. It has been fun for Jeanie and me to watch. As always, these games are being held during controversy. But Olympics have always occurred in challenging times, which is part of what is remarkable about the Olympics. We, as a broken and divided world, lay down our arms and compete. But sometimes we just can’t leave it alone. Oh, but sometimes we can!

But African American Jesse Owens became friends with Lutz Long, who was a Nazi soldier. Despite the presence of angry, racist leader, Adolf Hitler, at the games and plenty of Americans who had bias towards all Germans, these two made the choice to be friends.

“It took a lot of courage for him to befriend me in front of Hitler,” Owens later said in an interview. “You can melt down all the medals and cups I have, and they wouldn’t be a plating on the 24-karat friendship I felt for Lutz Long at that moment. Hitler must have gone crazy watching us embrace.”

After besting Long and taking home gold in the long jump (and three other medals),  Owens was famously photographed saluting the American flag. Long stood behind him, offering the Nazi salute.

The two remained friends, keeping in contact as much of world plunged into war. Long was stationed with the German Army in North Africa before being killed in action on July 14, 1943, during the Allied invasion of Sicily, at the Battle of San Pietro. In his last letter to Owens, Long, seemingly aware of his impending fate wrote, “My heart tells me, if I can be honest with you, that this is the last letter I shall ever write. If it is so, I ask you something. It is a something so very important to me. It is you go to Germany when this war done, someday find my Karl [Kai], and tell him about his father. Tell him, Jesse, what times were like when we are not separated by war. I am saying—tell him how things can be between men on this earth.”

In 1951 Owens traveled to Germany to meet Long’s then 10-year-old son, Kai, fulfilling his promise to indeed tell the young boy how things could be. Owens eventually served as best man at Kai’s wedding, and the two families remain in contact to this day.”

Their friendship was and is powerful. They were men of their times but didn’t let that keep them from being friends. If they could figure it out, we should be able to do the same.

In the all-time best show of love, our loving God chose to make us His own by sending Jesus to die on the cross to take away our sin. We did nothing to earn it. He “befriended” us by His grace. Saying “yes” to Jesus is to become a friend of God. Our friendships here on planet earth are meant to be reproductions of that Godly relationship.

May we all be willing to see past the skin color, nationality, political views and differences and reach out to love. May we be willing to befriend our brothers and sisters, no matter the variation. Let’s all “go for the gold” …

…and love each other.

Note: I try to post to the blog every few weeks. If you would like to receive the blog posts by email, you can subscribe to "parenting 101 by email" on the blog. Please pass these on to friends that could use the encouragement. If you’re getting this email yet you already receive the posts from blogger, let me know and I’ll remove you from this mailing list. Thanks. Have a great day in the Lord -JS

Posted by Joseph Staples at 2:51 PM No comments: