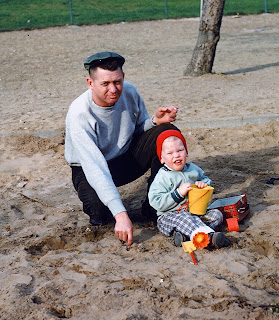 A legacy of faith. As was true of most of the early Staples’ family, he loved God and was dedicated to the Methodist church. The Methodist church in Roopville, Georgia still stands today. I have copies of his Sunday school notes that he used as he taught class for many, many years. He was far from perfect, but his faith grew more and more as he grew older. His faith mattered and he passed it on.

A legacy of integrity. Honesty mattered to my dad. He put coins in the parking meters and he paid all of his taxes. “I have no problem paying taxes,” he would say, “It’s just what every man should do.” Having a good name made a difference to him and he elevated honesty and truth as he dealt with people. He was the same man in private as he was in public. As his son, I saw him lose patience and get angry frequently, but he knew how to say “I’m sorry” and I watched him settle differences quite often.

A legacy of simplicity. My dad was absolutely at his best with those who had the least. He could mingle with the “high-falutin” physicians, but enjoyed the blue-collared folks the most. My dad kept things uncomplicated. His favorite ice cream was Blue Bell Vanilla. Boring maybe, but it was all he needed. He never forgot his simple Georgia roots. Though, as a physician, he had the choice to be proud, he preferred not to elevate himself above others. He was humble. As a goofy teenager, I was often embarrassed by his faded jeans and suspenders. I sometimes wanted a “cool” dad. But I came to realize that my dad was more than cool: he was awesome.

A legacy of hard work. My dad didn’t mind breaking a sweat while doing a long project. After he retired, I remember trying to keep up with him as he tended to his garden in the back yard. He could work me into the ground. I remember appealing to my dad one Sunday afternoon. I was a freshman in high school and after watching football on TV, I had run out of time to mow the yard. It was 5:00pm and I needed to be at a Young Life event at 5:30. “Dad, I won’t have time to cut the grass. I’ll do it later in the week,” I said. “Well, you should have done it earlier today. I guess you’ll have to miss youth group,” he said. “I can mow it later this week,” I appealed. “Nope, it needs to be today,” he replied. I wasn’t happy about it. After all, I was going to youth group- the Christian thing to do. But he wouldn’t budge. I mowed the yard and learned that keeping a promise trumped any Bible study.

My dad was an awesome man. I only hope to imitate a little of his character and life. He loved my mother, Mildred, so, so much. And he loved and nurtured his four sons with everything he possessed.

I am honored to have had Pelham Porter Staples Jr. as my father and I will always be thankful that I had thirty-one years with him. I too am thankful for his legacy branded into the Staples family. Thank you Lord for a my dad and for his powerful, simple life…

…and for his beautiful, faded jeans and suspenders.

Posted by Joseph Staples at 2:41 PM No comments: