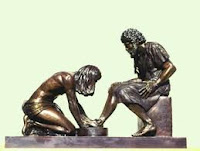 “…but whoever wishes to become great among you shall be your servant” -Matt. 20:26

It’s been said that people are born to be leaders. I’m not so sure leadership is a genetic predisposition or a skill that’s learned early in life. To most people, a good leader is someone who leads. But truth is, a great leader is someone who serves, and the others-centered servant learns his skills early.

I remember as a child admiring the Smith family (named changed to protect the innocent) down the street. They always had mini bikes in their driveway and cool motorcycles down at the “trails.” The trails were the paths through the woods behind our subdivision where I spent countless hours playing as a child.

My dad wouldn't let us boys have mini bikes or motorcycles. I remember him saying, “I’ve seen too many kids in the ER seriously hurt by them.” That sounded scary to me so the phase passed, but I still thought the Smith kids were cool through junior high because they “led” a lot. They were always out in front in sports and activities. By the time high school came, they were still leading, but in areas like drug use and fights after school.

In high school, my admiration switched to another kind of leader (and I will share his name). Andrew Thomas was an African American friend that came to my high school from across town. He played football next to me as a linebacker and we became good friends. I admired him as a leader. His quiet demeanor and leadership through serving was an awesome characteristic. He was a great and quiet leader on the football field and was admired by many.

Teens might appear apathetic and passive, but their eyes are open and their ears are listening for truth. They are looking for honest, truthful leadership. They recognize that the loudest and most talkative person isn't usually the best leader. They are watching parents like hawks and are thirsty for truth and wisdom.

Be a parent that models servanthood to your family. When opportunities present themselves, give. Unselfishly give. Be a family that serves together. Go to the homeless shelter in your town on a Saturday and serve. Go to the neighborhood food pantry and give your time. Take the family on a mission trip to Africa or across town to pour into the lives of those less fortunate. Or those more fortunate, it doesn't really matter. Just give.

Your kids will learn that a true leader isn't the one who has the title or is up front. The true leader is the servant. Jesus was the perfect model. Be sure to read His stories to your kids and teens.

Model servant leadership and you kids will admire your spirit of servanthood much more than the Smith family!