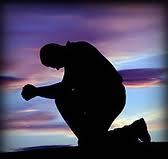 “The sacrifices of God are a broken spirit; a broken and a contrite heart, O God, You will not despise” –Psalm 51:17

Brokenness is an intriguing concept. For most, the picture of a “broken person” is one of weakness and desperation. Yet, the Bible speaks of the strength of a “broken and contrite heart” and the weakness of the prideful man. Don't be afraid to let your kids see you as a broken parent.

Sure, they need a secure and confident mom and dad, but they need to know that moms and dads are real and that life isn't perfect. What they really need to see isn't the difficulty, but how mom and dad work through the difficulty. They need to witness the surrender of the trial to the Lord. Why? Because they have many a struggle coming down the road and the way parents handle trials is the way they will tend to handle trials.

Someone said, “God loves much whom He breaks much.” Someone else said, “we stand the tallest when we’re on our knees.” The point is that humility is strength, not a weakness and too often we, as parents, want our kids (and everyone else) to think we have it all together.

But we all know secretly that we have nothing together. The more I work with people and live with myself, the more I realize that apart from Christ, I’m a mess. Larry Crabb said, "Brokenness and freedom go together, in that order;  first suffering, then comfort;  first trouble, then joy;  first felt unworthiness, then felt love;  first death to the self, then resurrection of the soul.” Being broken isn't strong in of itself. It’s the filling of the void it creates that brings the strength.

Years ago, I was roller-skating (very poorly) with a bunch of college students and we decided to play hockey. Like most games, it got pretty competitive and as I was going for a shot, one of the “kids” pushed me to the ground. I caught myself with my hand and broke my wrist. I went to the doctor and he put a cast on it. I returned in 2 months to have it removed, but he had bad news. “The bone hasn't set. It’s still broken. We’ll put on another cast.” I returned in a month and the news wasn’t any better. “It still has not set. We’ll try one more cast and then we’ll have to do surgery.” (Yuck). I returned a month later, he did the X-ray, shook his head and said, “well, here’s the deal (never a good intro). It healed! No more cast and it will be stronger than before.”

“Stronger than before.” I like that idea. And that’s what being broken promises. There is strength in the brokenness because it produces a strengthening of faith that didn’t exist before. That’s why James wrote to “have joy in trial because it produces something stronger than before.” [my paraphrase] The catch is, I have to let the Lord fill in the voids and do the healing. He makes us stronger than before. That’s what we all desire for our kids. As they grow up and move away, we want them to understand the progression of trial, taking it to the Lord, and trusting.

So, discuss life with them along the way. Don't shield them from life’s struggles and remind them that there is joy in the trial, even if they have to wear a cast for a while.