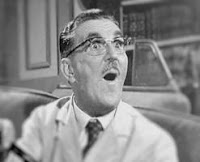 Watching one of my favorite TV shows this week, I was again reminded that one of the most powerful things we can do for those we love is listen to them. I’ve always thought of myself as a pretty good listener, but a friend challenged me this week to be a better listener with him. It seems I practice selective listening. Most of us do. Listening is not as easy as it seems and is a treasure for those we love (especially our kids) if we choose to put it into practice.

For those of you who don’t watch the Andy Griffith Show, Floyd Lawson is the absent-minded, quirky barber with the little mustache, who hosts the men of the town all day in his barbershop. For those of you who do watch Andy, I bet you didn't know that his last name was Colby in his first appearance only and then changed to Lawson for the rest of the series. I think what made Floyd such a great friend to everyone in Mayberry is that he listened. He was always waiting in his chair for anyone ready to engage in a conversation about Calvin Coolidge or the weather.

Howard McNear, a veteran actor in the 50’s and 60’s, played Floyd. He was hired by Andy Griffith to play the minor role at first but, because of his immense talent, became a major character in on the show.

If you aren’t into the Andy Griffith Show, let me first share that it’s not too late. There is no statute of limitations on Andy, so though you’ve deprived yourself all these years, there is still time. Think about it, after almost 50 years, the show is still on TV most of the day on various stations. Secondly, let me assure you that if you get your “Andy fix” at least a few times each week, you’ll be more emotionally stable. Trust me. I’m a Counselor.

What was it about Floyd? When interviewed a few years ago, Andy Griffith and Don Knotts both said the actor on the set that cracked them up the most was Floyd. They both said they had to stop more takes because Floyd would have everyone laughing in the middle of a scene. He was a likable and respected actor.

Floyd was just a character, but he also was and is a good reminder to all of us of what a true friend should be. He exhibited 3 qualities that we all need:

He was “others” centered. He spent most of his time asking the townsfolk how they were doing. Most conversations weren’t about Floyd, they were about whoever had just walked into the shop. People congregated in the barbershop because it was a place to be accepted and that atmosphere began with Floyd himself.

He was content. Floyd was 100% OK with being the town barber and was at his best when telling a story or laughing with his buddies. Again, his friends liked being at the barbershop because it was a place of peace in the craziness of Mayberry.

He was a listener. As was already mentioned, Floyd let the other person talk more than he did. His apparent naivety lent itself to his willingness to let the other “fella” tell his story first. “You don't say,” Floyd would often remark, as he focused on the other person.

Yep, one of my favorite characters is Floyd and I hope to be more like him as I love and listen to my family and friends.

But without the mustache.