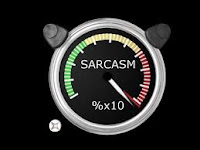 “Let no unwholesome word proceed from your mouth…” Eph. 4:29

“Speaking the truth in jest.” Sounds innocent enough, right? But in reality, cloaking a true statement in humor usually produces confusion and frustration. I’ve heard it said that sarcasm is the lowest form of humor. It typically gets lower marks because it’s really not funny. Of course, it’s kind of funny to the person dishing it out, but in the end, it’s usually destructive to friendships, marriages and families. When the sarcasm meter is raised, the quality of the relationship is lowered.

The word sarcasm comes from the late Greek σαρκασμός (sarkasmόs) taken from the word σαρκάζειν meaning 'to tear flesh, gnash the teeth, speak bitterly.' However, the ancient Greek word for the rhetorical concept of taunting was instead χλευασμός (chleuasmόs).

Thomas Carlyle, the famous Scottish writer, despised it: "Sarcasm I now see to be, in general, is the language of the devil; for which reason I have long since as good as renounced it."

Psychologically, sarcasm is used because it’s a safe way to express one’s negativity without being direct.  Your wife is on the phone downstairs at your home in an exciting conversation with a friend. When she hangs up, you say, "I think you should talk a little bit louder next time -- the entire neighborhood didn't hear it." Your wife smiles and apologizes. Why not just share with her, “Honey, next time would you mind speaking a little softer?” Or, why not just shut the door to your room? Because, other factors always contribute to the use of sarcasm.

Jealousy and envy are typical precursors to sarcasm. My wife’s enthusiastic conversation with her friend might remind me of my lack of friendships. Hearing her talk stirs my heart to jealousy. Or perhaps I’ve already “let the sun go down” or “stuffed” anger towards my loved one for an earlier issue. When I’m sarcastic I’m speaking a half-truth: yes, I’d like you to be quieter, but I’m getting in the jab also.

Parenting can certainly produce sarcasm. Our teen has been studying for a test and announces that she’s taking a break for a while to watch TV. “Oh good, you sure wouldn't want to study too hard or you might make an A on the test.” She looks at you with a smirk and goes upstairs to watch TV. You’re actually upset because of the C she has in that Biology class and her lack of effort you sense in her attitude towards the class. But you’re afraid to confront her about her studying habits.

Fear is certainly one of the roots of sarcasm. Usually, people-pleasers are the most sarcastic. They don't want to be too direct and run the risk of damaging the relationships, so the “cloaked truth” is the substitute. Then, if the other person claims they’re being rude, they can play the “I was only kidding- gosh, can't you take a joke?” card.

Scripture repeatedly challenges us to “speak the truth in love” (Eph. 4:15) and reminds us that, “open rebuke is better than concealed love” (Proverbs 27:5). We need to continually be honest with ourselves and keep our slate clean in our relationships. If I’m sarcastic, let it be a warning to me that I may have issues I need to resolve in my relationships.

It’s tough, but certainly easier than the damage produced by “tearing and gnashing!”

Wow, what powerful, convicting truth Joey. Such a reminder of the power of the tongue.