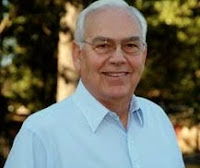 “In all things show yourself to be an example of good deeds, with purity in doctrine, dignified…” -Titus 2:7

Everyone would agree that our children need positive role models. Negative role models seem to flood the media with an attraction that draws many teens. Their deviant behavior is attractive to kids that are looking for justification for their own rebellion. Kids are also looking for positive examples to justify their good behavior. It’s important that we magnify these role models, young and old, famous or not.

One such man is George Terry, a Branson resident and member of First Baptist Church in Branson. George is a young man in his seventies and has been married to his beautiful wife, Evelyn, for more than fifty years. They have a son Dennis and three grandchildren. George was raised up north and spent twenty five years in Kohler, Wisconsin working in the upper management of Kohler, Inc. In 1987, he and Evelyn moved to Branson where George managed the Stonecroft Conference Center for twelve years. They hosted thousands of church retreats and George ran the program well.

When his tenure at Stonecroft ended, he and Evelyn traveled for two years in an RV and did volunteer work with other ministries. In 2001, George joined the Staff of Branson First Baptist Church where he helped in the daily running of the church and the building of the Life Center. Eventually, he retired (sort of) and continues as a huge advocate of the church. George is an avid NASCAR fan and Green Bay Packers supporter.

That’s all about the man on the outside. But men are truly measured by what’s on the inside, in the heart. George is a man of faith, a man of few words, and a man of perseverance.

A man of faith. I have had the privilege of getting to pray with George and another friend on Thursday mornings for over ten years. We pray for this friend’s ministry. They say you truly get to know someone when you pray with them. I have seen George’s sincere heart for God and his heart for those who don't know Jesus. A few weeks ago, George had a stent put in his heart and less than a week later, he was leading a teenager to Christ during an event at our church. Amazing.

A man of few words. Simply put, when George talks, people listen. He is a man that is “quick to listen and slow to speak.” His wisdom runs deep, after storing up years of knowledge, experience and time with the Lord. John Wayne once said, “A big mouth don't make a big man.” So true with George.

A man of perseverance. Plenty of us wake up with a slight headache and we whine about the rest of the day. George has had multiple heart and back surgeries over the last fifteen years. Not once have I ever heard him complain or blame. He instead chooses to acknowledge the grace of God in His gift of years. He still chooses to give God the glory for His healing.

George, thank you for your example and for showing us what joy and peace look like above circumstances. Thanks for being such a great role model for me and everyone you encounter.

May the Lord bless us with your example for many more years. You are a blessing.

Amen to all you said about our friend George.