"But Paul chose Silas and left, being committed by the brethren to the grace of the Lord and he was traveling through Syria and Cilicia, strengthening the churches" - Acts 15:40-41 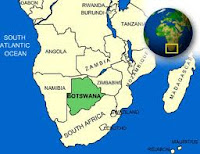 The idea of "Missions" probably came from the Latin word, in the 1500's, of "a sending abroad." Originally from the Jesuits, the Latin word missionem (nom. missio) meant "act of sending, a dispatching; a release, a setting at liberty; discharge from service, dismissal." Of course, when we think of "Mission trips," most of us think of Paul. All those maps in the back of our Bibles chronicle his journeys through Asia and Europe. Those maps got most of us through the boring sermons of our childhood. And they are a great reminder to us that we need to "go." Jesus commanded us to "go" and make disciples. Sure, for the people across the street, but when He leads us, we're to "go" across the ocean as well. Later this week, we will be "dismissed and released" to go to Africa. We've been planning this trip for months and it's finally here. Sponsored by First Baptist Church in Branson, eleven of us are heading to Botswana, the country right above South Africa. It's about the size of Texas with a total population a little less than Houston, about 2 million. We're going to share the love of Jesus with the people there. We're also going to support Brian Beadle, my brother-in-law, who has been a career missionary to the Botswana people for more than 12 years. I'm predicting one thing for sure: we'll be blessed as much as the people we're going to bless and we'll be loved as much as the people we're going to love. It seems that in those too seldom times when we give of ourselves, we always inherit the blessing. Funny thing is, we know that, but yet we're hesitant to serve. We just have so much we think we need to control around us that there is hardly time to be concerned about someone else. There's a harsh word that describes that cycle pretty well: selfishness. Yikes. Not a pleasant word. But true. One of the most amazing things about Paul and his travels of thousands of miles around the known world was the simple fact that he went. Today, that's no big deal, but back then, the culture didn't travel. I read once that in 1855, the average American never travelled more than 50 miles from their hometown. Of course, the Civil War changed all that. The war sent thousands and thousands of men all over America and we've never looked back. Jesus should provoke the same reaction in us. Why has America "never looked back?" Because Americans found out that there was so much to see and experience in America. Staying put was a poor alternative to "leaving." The spirit of God reminds us that we need to "go," not just geographically, but in our souls. Change is difficult because we're inclined to stay the same. Growth always requires a willingness to go because there's so much to see and experience in our faith. Though we have people staying in our home, we have to leave it behind and "go." In Maun, we're planning on doing construction work on Brian's church, help at the orphanage, and do a Bible school for the children. But we're open to doing whatever the Lord has in mind. It will be several weeks before I post to the blog again, but, in the meantime, we would sure appreciate your prayers. Not just for the Mission trip, but for our hearts to be changed. Then, even when we return, we'll keep "going." By Eric Joseph Staples © www.parentingyourteen101.com
Posted by Joseph Staples at 7:18 PM

We just enjoyed an audience last night at our church with a Kenyan national, Bernard, who is a leader of pastors in his country and is partnering with our church for our African missions. His main point was that we need to abandon the "sender/receiver" perspective most western churches have always had. We are rather to be partners in our mutual efforts. He gave many tangible examples of how this is fleshed out when a team from Grace makes a trip to Africa. The session was filmed, so I'll be sure to post a link if/when it's made available online.
My heart is happy to hear what a great trip you had! Please don't move on to Branson business until you post some more about the trip. We all will enjoy reading your insights about it.