The Redemption of Nathan Bedford Forrest 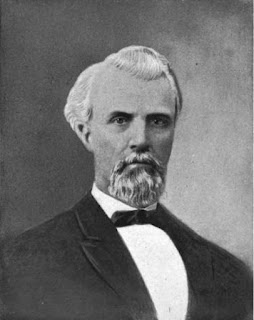 (Most of this post comes from the excellent research & interviews by Shane Kastler, pastor of Heritage Baptist Church in Lake Charles, Louisiana. He is also the author of the book “Nathan Bedford Forrest’s Redemption”)

Two weeks ago, no one knew who Nathan Bedford Forrest was. Okay, maybe you’d heard of Forrest Gump who, in the movie, was named after him. But social media posts did their thing about him and a petition circulated to remove his statue from somewhere in Nashville (and from history itself apparently). As is true with a lot of our past leaders, curiosity has been stirred up to find out more about who these people were and what they did to deserve such demands nearly 160 years later.

I don’t write this blog to offend anyone. I’m actually writing it to encourage everyone. No matter our vices, praise God for the power of redemption and change. Like Nathan Bedford Forrest, may we all be willing to grow and rest in the peace of Christ.

And at first glance, everything that pops up on Google certainly does show a “snapshot” of a man who was a wicked racist most of his life.

He was born in Chapel Hill, Tennessee in 1821. He would eventually settle in Memphis by the age of 20. Memphis is where he would gain his massive wealth as a slave trader before he joined the Civil War in 1861. During the war it was under his command that in April 1864, the Fort Pillow Massacre occurred where roughly 200 black (and several white) soldiers were brutally killed after they had just surrendered. After the war he joined the KKK in 1867 and was given the title of Grand Wizard. The end.

No sorry, that’s just the 30 second blurb that the majority of people behind these petitions know or, for some, all they want you to know.

In the famous words of Paul Harvey, there is a “Rest of The Story.”

In 1869, just two years after joining the KKK, Forrest expressed disillusionment with the lack of discipline among the various white supremacist groups across the South, and issued a letter ordering the dissolution of the Ku Klux Klan and the destruction of its costumes. He then withdrew from the organization.

You see, Forrest was married to a godly woman who prayed for his salvation. He came to know Christ as his personal Savior. When he became a Christian, he called for the KKK to disband, and began speaking out in favor of black civil rights.

Perhaps the most poignant aspect of Forrest's transformation occurred July 5th, 1875 when he was the first white man to ever be invited to speak by The Independent Order of Pole-Bearers Association (predecessor to the NAACP). One of their early conventions was held in Memphis and Mr. Forrest was invited to be the guest speaker. In this speech he said that there was no reason that the black man could not be doctors, store clerks, bankers, or any other job equal to whites. They were part of our community and should be involved and employed as such just like anyone else.

Forrest encouraged them and promised to be with them in "heart and hand." He told them to pursue careers, even politics, and use their newfound freedom to make a solid life for themselves.

After the war, Forrest worked tirelessly to build the New South and to promote employment for black Southerners. Forrest was known near and far as a great general and was a well-respected citizen by both blacks and whites alike.

Nathan Bedford Forrest passed away in 1877 from complications of diabetes. When Forrest died it is noteworthy to add that his funeral in Memphis was attended not only by thousands of whites but by hundreds of blacks as well. The funeral procession was over two miles long and was attended by over 10,000 area residents, including 3000 black citizens paying their respects.

I understand that most people have good intentions and feel the need to just do something during this intense racial time. Petitioning for the removal of a statue physically or a figure historically may sound like a good noble gesture based on the above 30 second Wikipedia blurb. But once you learn the whole story wouldn’t it be something if people today would instead point to Forrest as what they wish every racist would become? Although late in life, God changed him. Wouldn’t it be wonderful if his repentance of his former sins, as terrible as they were, could be a message to all people that God’s grace is available even to the worst of us? Wouldn’t it be wonderful if this part of Forrest’s life was more popular on social media than what’s trending now?

I have a feeling that Forrest would be the first one to say, “sure, take down my statues! I don’t deserve them anyway. I was a lost, but now I’m found. The best place for me to be remembered is by my Lord God in heaven anyway.”

There’s a bigger story here of hope, grace and forgiveness that we all need to soak into our souls. I’m so glad that I came across Shane Kastler’s research. It allowed me to dig a little deeper into the life of Nathan Bedford Forrest. And that’s why it’s worth sharing. In the end, evil did not win in this man’s life. He came to know the Lord and his eternity was changed forever. And that, my friends, can’t be undone by any petition.

I am so glad we are not ultimately judged for our past. Life moves on. We all have made mistakes- some small and some huge- but redemption is truly a beautiful thing.

Forrest was ahead of his time regarding race relations. Rather than a villain, he should be held up as an example of what the community should desire a “racist” to become. America needs to heal and the South has many problems. But Forrest isn’t one of them. Let us commit to letting historical facts speak for themselves and show the same grace toward others (including Forrest) that we want shown toward ourselves. Jesus said, “Let he who is without sin cast the first stone.” Put down your rocks America; and bend your knee to the God of all mercy. Forrest found grace. And so can you.

After all, Jesus calls us to "love our enemies" and when we do this we sometimes find that our enemy isn't really our enemy at all.