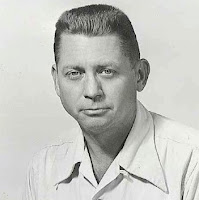 This father day, I want to honor the wonderful legacy of my father, Pelham Staples.

My dad was born March 18th, 1919 in Roopville, Georgia on a cotton farm. He was the fourth son of seven kids. After serving in World War II, he married my mom, went to medical school and practiced medicine for his whole career. But his main focus was always his four boys, of which I was the youngest.

My dad died suddenly in 1988. He was my father, my hero and my security. When he died, my world stopped for a while. Even though it was 22 years ago, it seems like yesterday. I still miss him very much. The sting of grief has definitely turned into something sweeter than before, but I know that a part of me is gone and will never return. I also know that I have a heavenly Father that is more than capable of filling that void in my heart that left us all that cold December day.

It’s funny the things we remember about those that we love. When I think of my dad, I remember things he said. He was a man of few words and language meant a lot to him.

“There are a lot of things worse than dying.” He often spoke of the sadness of lack of love within family, living a life of empty conceit and the importance of living life to fullest. I saw my dad die a lot through his giving spirit and unselfish attitude. He was a giver.

“Worrying doesn’t stop the rain- besides the farmers need it.” Seldom did he comment on the rain-instead he rejoiced in who was recieving the blessing. My dad’s agrarian background often showed in his appreciation of nature. We’d be driving along and he comment on “the beautiful crops.”

“Joey, I’d love to decide for you but I’ll only decide with you.” I went to him for so much counsel. “Should I go to Baylor? What should be my major? What do I do after college? Should I marry this beautiful girl named Jeanie? Should we move to Branson?” With all the questions came that same response. He knew I needed to own my life, but he was always there for me.

After he died, as we sat at visitation at the funeral home, an old pickup truck pulled up in front and a well-dressed Mexican family filed out of the truck, 4 girls and the mom and dad. It was Gonzalo, my dad’s helper at our ranch, and his family. They had driven all the way from west Texas to honor my dad. They came over to my mom and the brothers and introduced themselves. Then he pulled up the cuff of his pants to show us his lizard skin boots. “Your father gave me these boots. One day he noticed my boots were old and worn out and right there on the spot he took off his boots and gave them to me. I will never forget Dr. Staples and I come to honor him.”

My dad would be the first to say he was far from perfect. But he was a dad that loved. I am so thankful I got to be his son, and that I can live the rest of my life to honor him and my heavenly Father.