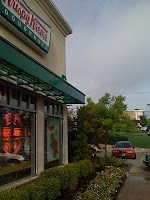 One of the things teenagers (and adults) crave from any authority (parents included) is genuineness. When authority is real with us, we typically respond with respect. But when the words don't match the works, there is a problem. When the words spoken contradict the life lived, disrespect sours the relationship.

The attached picture is the model of contradiction. It was taken in Little Rock, Arkansas a few weeks ago. I was there on some Doulos Ministries business and a friend told me about this interesting oddity. You can see the Krispy Kreme restaurant on the left. The signs inside say “enjoy the donuts.” The building across the street, behind the car, is the Little Rock Heart Hospital.

How convenient. I wonder which came first. Did the Krispy Kremers build the hospital, guaranteeing them business as they clog arteries one donut at a time? (By the way, I love Krsipy Kreme donuts). Or was the hospital behind on income, so they built the Krispy Kreme to drum up business? Hum.

Too many times, as parents, we say one thing, and then live out the opposite. There are the obvious examples like, “You’re too young to smoke. Now, please pass me my cigarettes.” And, “OK, everybody order something healthy. Now, can I have the super sized super size meal with the super sized triple burger please?” (By the way, I love burgers too).

But it’s the not so obvious examples that can produce lack of respect between parents and teens. When we lecture our teens about loving everyone and only speaking well of others, we reinforce the rule, “If you don’t have anything good to say about someone, then don't say anything at all.” But when we rip apart the baseball coach driving home after the game, we’re leaving our kids confused. Or, when we tell out teen that it’s the heart that matters, not looks, but then spend three hours fixing our hair and picking out clothes, we produce more confusion.

The message we’re sending is, “It's OK to say one thing and then do another. As long as you believe it in your heart, then what you do doesn't matter.” And the door opens to the classic “white lie” –a lie we’re convinced doesn't really hurt anyone, but keeps us covered.

The truth is, most of us are masters at rationalization and great at justifying most anything to suit our need. What might appear as a contradiction to others is fully justified to ourselves.

So be sure your words match your belief. Be sure your teen sees a genuineness and honesty in you as their parent. Sure, we’re all going to make mistakes from time to time, but we can all be real and honest. Model integrity and honesty as you live your life out before your teenager. Pray for a check in your spirit when the potential for dishonesty exists. Don’t cheat in board games, don't short change at the restaurant, live out a genuine faith, and practice what you preach.

When your teen takes pictures of your life, be sure they see consistency, not contradiction. Go ahead and enjoy the donuts, just don't label them as health food.