Andy and the women speeder 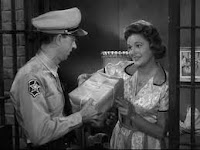 There are times when the blunt truth spoken in the right context makes all the difference. As parents, we need to always be prayerful about our tongue. The Bible pretty much sums up our speech as a lost cause on it’s own- we’re going to speak when we should listen and we’re going to listen when we need to speak. Only godly discernment will give us the discernment with our kids.

As always, the Andy Griffith show dealt with that matter almost 40 years ago. On a country road with Barney, Andy nabs a lady speeder. She refuses to pay the fine and insists upon a trial. She is incarcerated in the Mayberry jail until Mayor's Court sits the following day.

In the meantime she seduces the witnesses against her - Barney, Floyd and Opie - with flattery and, in Opie's case, the gift of an autographed baseball. In Mayor's Court, her case is dismissed because the witnesses won't testify against her.

Andy tells the lady speeder she has corrupted justice with her wiles. He is firm but honest. She is shamed. Leaving town moments later, she deliberately speeds away. Andy and Barney pursue and stop her on the road. This time she pays the fine with good grace and, wanting to right previous wrongs, pays the fines she eluded in Mayor's court.

Her change of heart was contingent upon Andy telling her the truth. He was under control, but he shared his heart with her and walked away. Her shame was a good thing. Shame is a tricky concept because, in the wrong context, it is not healthy. But when it leads to good guilt, it can be so freeing.

Truth is, out teens know when they have done something wrong. They aren't as clueless as they let on. Many teenagers are just asking for someone to get in their face and correct them in love. I remember disciplining our kids when they were young and they would tag next to me the rest of the day. Why? Because they sensed love in the process.

The woman sped away because she wanted to get caught. She needed a chance to repent of her wrong and Andy allowed it. He showed forgiveness for her past mistake and let her right the wrong. In other words, Andy loved her through the process, not only with his hard words, but with his forgiveness also.

Be a parent that is willing to be lovingly hard and honest. Pray for the discernment to know the right timing- when to listen and when to talk. Share your frustration in love and let it go. Don't harbor anger. Give your teen a second chance. Then, if they recognize the guilt, you’ll be ready to help them right the wrong. If they don't face the guilt, then you correct them again and again. If they continue with the wrong, seek help from a Counselor.

Be ready to speak truth to your teenager in love and the godly counsel will give them life.

And hopefully keep them from speeding.