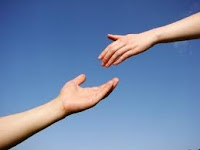 We’ve all read about Hannah in the Old Testament. She could not get pregnant and she prayed to God that if He would give her a son, then she would give her child back to Him. She indeed did become pregnant, Samuel was born, and after he was weaned, she gave him to Eli, to raise her son in the covering of the Lord.

I’ve often thought about Hannah’s faith and trust. Many make shallow promises like, “Lord, if you allow my team to win, then I’ll never eat a candy bar again.” Our team wins and we don't eat a candy bar for a few days. But soon, we forget the pact we made with God. Hannah did not forget. She really did give up her son.

All of us parents know the pain of giving up our kids: letting them go on that first sleep over or dropping them off for a week of camp. It rips our heart out and hurts to give them up and let go of something so dear to us. But we know we have to give them up to let them grow.

I remember dropping of Eric at Camp when he was 8 years old. He was so excited but we were so sad. We packed his footlocker and helped him carry it to his cabin. Jeanie put the sheets on his bunk bed and we hugged him goodbye. As we left him in the cabin, we had tears in our eyes. He did too. We drove home (5 minutes away) and missed him dearly. But his time at camp was invaluable to him growing up. He needed to stand on his own and find his identity apart from his sometimes overprotective parents.

I remember dropping off Elizabeth at Baylor when she was 18 years old. She was so excited but we were sad (sound familiar?). She was ready for her college experience and would be rooming with her best friend. We unpacked all her “stuff’,” organized her dorm room and paid the bills. Then, it was time to say goodbye. We cried as we prayed together. Then, we left Waco and made the 8-hour drive back to Branson. That drive is a blur, partly because it was almost 10 years ago, but also because I think we cried the whole way home. They were tears of joy for her but tears of sadness because we felt we were losing our little girl.

There is such power in “letting go and letting God.” Of course, releasing our kids doesn't mean we’ll lose them. As we let them go, they grow up and change, but we’re always their parents. Like Hannah, when we release our kids, they are primed to grow up. Like Samuel, when we commit our kids to the Lord, we release them to the providence of God. Some parents have lost their kids. They understand that our kids are a gift to us as parents, for a while. Nothing in this life lasts forever.

Eric and Elizabeth aren’t perfect (no one is), but they have both grown up into phenomenal adults. I believe it is partly due to us (reluctantly) letting them go to grow on their own.

The first book of Samuel records that Hannah gave Samuel to Eli, “after he was weaned.” It’s a reminder that our kids have to be prepared first. So, we’re challenged to raise, teach and instruct our kids, and then “let them go” to grow on their own. There really is freedom in the letting go.

Freedom for our kids and for us as well.