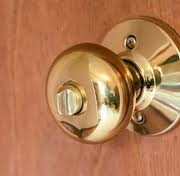 Healthy relationships have conflicts. I know, the words “healthy” and “conflicts” don’t seem to go together. But the only way to keep the relationship slate clean is to deal with the issues that mess them up. This especially includes marriages and parenting. Why? Because our family is where our most important relationships exist. The best way to approach conflict is with a sense of urgency and not “sweeping issues under the carpet.” Sometimes it’s not about who is “right”- the power to agree to disagree is powerful. And the willingness to listen is powerful too.

The other day I was walking down the hallway at the church. I remembered I needed something in the main office, so I turned to open up the door, but the knob wouldn't move. The door was apparently locked. Yet I looked through the glass and our secretary was motioning to me that the door was unlocked. She was saying, “Come on in- try a little harder.” I tried to turn the knob again. It would not move. She again motioned to me that it was unlocked. I motioned to her that it was locked. We starred at each other for a few seconds. I was firmly convinced it was locked. She was firmly convinced it was unlocked. She motioned again to turn the knob. I motioned back that I’d tried. We starred and smiled at each other.

Then, she got up and opened the door from the inside. “Sometimes the lock gets stuck,” she said. She was right. I was right. The door was locked (I could not get in) and the door wasn’t locked (she had unlocked it 30 minutes earlier). So, who was correct? We both were. When we both saw the problem from the other’s perspective, it became apparent that we were both correct. As we shared the solution together, the goal was reached and the door opened.

When we’re in conflict, we typically look at the problem for our perceptive only. We kick into “fight or flight” mode, more specifically “fight” mode. And usually when we’re fighting, we’re at our worst, focused primarily on good ‘ole #1, ourselves. To get the problem resolved and the door unlocked, there are several keys (no pun intended) that we need to possess.

We need to focus on the other person. This one is tough, because when we’re in “solve it” mode, we tend to take ultra control. We put our “blinders” on and off we go. Remember, blinders are the devices used to help keep a horse pulling the carriage forward. They keep the horse from being distracted by objects to the left and the right. In this case, the blinders can actually hinder us from solving the problem. We focus so much on the problem itself, that we miss the people who can help us solve the problem.

We need to listen first. Our first inclination in a disagreement is to speak. We can spend so much time talking that we spend little time listening. The irony is that the other person many times has the solution to the problem, not me. My words simply clog the airspace between us. I need to zip my mouth shut and truly open my heart to hear what the other person is saying. Yes, there’s a time to share my perspective, but not until I understand yours first.

And lastly, we need to be flexible. Few people like change. We like things to be consistent and steady. And many times, what we see as a problem is really just a God-ordained change. Don't hold on too tight.

So next time the door is stuck, look up, listen and relax. Perhaps the answer lies on the other side of the door.