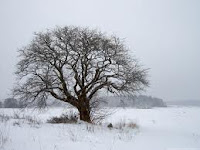 Spring officially started today, March 20th, at 1:14am. On the first day of spring—the vernal equinox—day and night are each approximately 12 hours long (with the actual time of equal day and night, in the Northern Hemisphere, occurring a few days before the vernal equinox). The Sun crosses the celestial equator going northward; it rises exactly due east and sets exactly due west. And the temperature slowly rises.

Back in October, the Weather Channel and all the weathermen (oops- weather-people) were predicting a cold and snowy winter season for the mid-west. Salt and snow shovels were put out for sale at Lowe’s and Home Depot. Everyone with fireplaces and furnaces purchased wood by the cord. People checked their antifreeze and some even switched to snow tires. We all prepared for a long, cold winter. But the winter of 2011 was the season that never came. All across the U.S., average temperatures were at record highs. In truth, we spent tons of time preparing for what never happened. It’s certainly wise to plan ahead, but we need to be careful of missing the joy of the present by worrying and planning too much about the future.

Life (and kids) can be so unpredictable. We make our plans, we have our expectations, and then our kids surprise us. We make all the preparations for the season we think is coming, then spring shows up instead of winter, and we’re disappointed.

The truth is, we’d rather have spring. But the joy of the season can easily be squelched by the change. Most people don't like change (me included). But God loves change. It’s in the fabric of His nature. And we should rejoice that He’s into change because we’d all be lost if He hadn't developed an alternative (Jesus) to His original plan that we messed up (sin).

We love spring- the new growth, the warm weather, the bird’s singing- but if we’re not careful, we’ll miss that season too. Spring is not winter, but it does have something in common with winter- it ends. Every season eventually gives way to the next season. It’s tempting to focus so much on the season to come that we miss the joy of season we’re in.

In the Bible, we’re challenged to be ready “in season and out of season.” In other words, don't have “seasonal dependence.” Depend on God and his unchanging nature and the season won't matter as much. As our kids figure out the course for their lives (and those seasons can change daily), our challenge is to stay focused on Jesus as our Strong Tower. Proverbs 18:10 says we’re to “run into it.”

The Tower called God is a great place to be safe from the storms. Or the snowfall. Or the hail.

It all depends on the season.