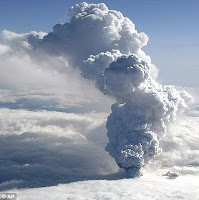 The world experienced its worst air disruption since September 11th, 2001 last week. From France and Belgium to the Czech Republic and the eastern Baltic states, aviation authorities declared their airspaces closed, which lasted for several days. Many airports across Europe were shut down for almost a week. Air travel was affected literally all over the world and took several weeks to get back to normal. Was it a terrorist attack or world war? No, it was the ash from a volcano on Iceland. Unpredicted and surprising, it took everyone off guard and disrupted millions of lives.

Disruptions seem to always cause some level of chaos. The formula goes something like this: a plan is made, then an unexpected event occurs which interrupts that plan, a disruption ensues, then the planner experiences anxiety. Then one of two things happens to the original planner: gets mad and attempts to change the interruption to meet the original plan, or changes the plan to fit the new event. In other words, the planner either “goes with the flow” or gets mad and attempts to manipulate the unexpected event. With a ministry on the move like Doulos and Shelterwood, I often tell the Staff, Doulos is spelled f-l-e-x-i-b-l-e. Life really is about how well we adapt to change.

What does this have to do with parenting? Well, a teenager is a living, breathing and walking “unexpected event” waiting to happen. Example: track season is about to begin. One day, your son announces at dinner that he’s “pumped to run track” and you order his track shoes with him on line from Eastbay that night. “I think I’ll run the hurdles”, he announces as he goes to bed. A few days later, he comes home after school. You ask him, “I thought today was the first day of track?”. “It was,” he announces, “but I’m not running track this year cause I’m playing on the golf team. I talked to the coach and he thought golf was a great idea. I already sent the shoes back to Eastbay. I’m pumped to play golf.” You can't believe it! You’d already been reading about hurdles on the Internet, written the track meets on the calendar and ordered a cool Nike outfit to wear to the meets.

Millions of travelers had plans to fly all over the world and many were upset. They demanded that the people responsible be held liable for the financial loss. Problem is, volcanoes can't write checks. Things changes. Plans change. People change. Most of all, our teenager’s change. Sure, we need to teach values of decision making and sticking to our commitments, but many times what we call a disruption is really just our teenagers changing their mind against our opinions.

So, be careful dictating your desire over the decision of your teenager. Help them understand the responsibility of decision-making, the good and the bad. After all, it’s their life, not yours. It’s their faith, not yours.

Pray for the Lord to give you flexibility so when the volcano erupts and the plans you made change, you will be supportive of your teen.

Thanks for your thoughts, Joey. I sure have enjoyed reading your blog. Wendy

Thank you so much for sharing your wisdom. Several (just about EVERY) post hits the mark for me as a parent. I frequently share sections on facebook to get all my fb friends to go read your blog! Sincerely, Tracy W.