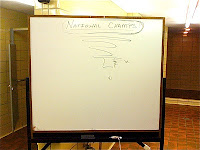 Basketball! It’s truly been March Madness the past few weeks! My bracket busted early on and I had no team picked for the final four. Pretty bad. It seems like I always pick poorly but it’s still fun. Though not as popular as the NCAA’s, the NAIA Championships were right here in Branson this year at the College of the Ozarks. The #15 seed Saint Francis of Indiana won the Championship as a huge underdog.

A few days after the tournament concluded, I was in the locker room getting ready for a workout when I noticed the blackboard that had been used in the Saint Francis locker room during the game. It had some basketball play drawn on it and a simple phrase written at the top, “National Champs!” I took a picture of the board on my iPhone.

I thought about it later. That team probably sat there at halftime, in the heat of the competition, and the coach probably gave them the “you can do it” speech. He then wrote out a dream on the board. Of course, he didn't just leave them hanging- he followed up the dream with a plan. He shared with them a strategy. The team bought into the dream and the plan and the dream became a reality. Now they are the Champions!

I wonder what your dream is for your family? Proverbs 29:18 reads, “where there is no vision, the people perish.” What an awesome gift we are handed when God blesses us with our spouses and children. We desire success and prosperity for our families but sometimes we fail to set prayerful, realistic goals for where we’re headed. Much like a budget, it’s freeing; not constraining, when we have a plan.

I wonder what being “National Champs” looks like for your family? It’s not about winning in sports. If anything, America’s families are too consumed with athletics (but I’ll address that issue another day). It’s about goals to build strong relationships, no matter the ages of your kids. Make the goals a little tough. Even if you fall short, you’ll be stronger because of the plan.

In Alice in Wonderland, Alice asked the Cheshire Cat to help her find the way. “Well, that depends on where you want to get to,” says the Cat. Alice replies, “Oh, it really doesn’t matter.” The Cat responds, “then it really doesn't matter which way you go.”

Decide where your family is going and write that goal on the family blackboard! Take some time to write out goals for your family: spiritual goals, financial goals, relational goals, goals for any area that will help your family win that Championship trophy…

…a family that loves one another and yields to God’s plan.©
Posted by Joseph Staples at 7:42 AM