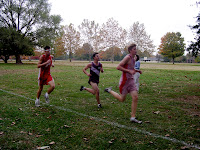 Our son Eric is a senior at the University of Arkansas. His four years of college have gone by quickly and he has done so well in his time there, not just in academics, but in yielding to God’s plan in his life. There have been some tough times relationally and spiritually, but he has never shied away from his commitment to finish God’s course for his life. We are so proud of him.

Let me tell you about another course he finished a few years ago. Flash back to his senior year of high school. It’s the Missouri State Cross Country Championships in Jefferson City, Missouri.

Eric was feeling great when the race started. Half way through the 3.1 mile race he was in 20th place (the top 25 medal). With 500 yards to go he was in 21st place. [in the pic, the runner in front]. As he rounded the corner to the finish line, only 100 yards to the finish, his body simply decided to shut down. We're not sure why, cause he's never had a problem with fatigue. With only 50 yards to go, his legs began to shake and then he collapsed. He got up, walked a few steps, then went down. We wanted to go to him so badly, but he would have been disqualified. It's funny, but at that moment he became our 5 year old again- our little boy that needed our help. But this was a burden he alone had to bear. He finally made his way to the end and literally crawled over the finish line. He finished 50th or something. Then, we joined him as he was carried to the medical tent. He was in the pre-stages of shock. He wasn't coherent, his breathing was erratic and his heart rate was high. They gave him oxygen and waited. It was a scary time for Jeanie and me and he was so cold. He wasn't responding to anyone talking to him, but he kept whispering,"thank you Jesus. Thank you Lord" over and over. God was watching over him. Jeanie and I were both secretly hoping this wasn't him getting ready to be with Jesus! The doctors were so close to taking him to the hospital, but 30 minutes or so later, after giving him oxygen, he finally looked over and had life in his eyes! He was back. A little later, he began to drink and we finally left the tent. It was the gutsiest performance I'd ever seen. He was determined to "finish the course" and I'll never forget it. He didn't win a medal, but he won the respect of every one that was watching. Back in Branson later, we spent the day talking about it. We may never know why his body chose to quit with just a few yards to go, but God had a bigger purpose. He did all he could do and I'm so proud of him.

After my father died, I was looking through his desk, and found a card with this quote by Theodore Roosevelt,"The credit belongs to the man who is actually in the arena- his face is marred by dust and sweat and blood....who knows the great enthusiasm, the great devotion, who spends himself in a worthy cause. Who, at best, if he wins, knows the thrill of high achievement-and if he fails at least fails while daring greatly- so that his place shall never be with those cold and timid souls who knew neither victory nor defeat."

Eric didn't medal but he did "dare greatly". Like he said, "I gave it all for the Lord. The results were up to Him".

I wonder what God is challenging you to “dare greatly” in today? As a parent or friend, the challenge to love is always a tough course. So is doing my best at work or in school.

Paul wrote, “ I have fought the good fight, I have finished the course, I have kept the faith” [2Tim. 4:7] . God designs the courses we’re all called to run. It’s tough to finish a course, but He promises to be with us and strengthen us to the finish line.

May we all finish our God-given course to it's fullest!©
Posted by Joseph Staples at 7:34 AM

What a great word, thanks, Joey. I needed a good verbal kick in the pants today to "go hard or go home." =)

once again, made me cry thinking about that moment. this was exactly what i needed to read today about finishing strong!! thanks dad.